Soul in the eyes

Since my early years, Afro-Caribbean rhythms have been my passion. They drew me to Haiti in 1980 and finally resulted in a more serious commitment for human development. - Please see "Our Montessori projects".
A skiing accident in 1973 changed my winter-holiday destinations to the Caribbean islands. This made me discover Haiti, but also Carnival in Trinidad, where I participated in costume several times and finally made a 11-minute film in 2009:

Rhythm remained alive - not only from Africa or the Caribbean.

In August 2015, I joined my Celtic harp playing wife, Isa, with my Celtic Bodhran-frame-drum to a German Summer-Music-Festival. There I (in a white shirt) joined an American country-style group under the direction of Bill Flowe:

A second enduring personnel passion, sailing, developed in my years as a student: With my first self-earned money I acquired a small rubber-boat with narrow sleeping space for one person under a self-made tent. The "boat" even had a sail. Three summer-vacations in the Mediterranean provided unforgettable memories. Later the mini-sailing-boat slowly grew to sailing boats with protected space for more than one person. 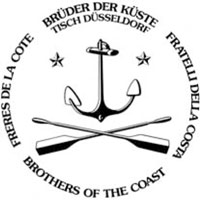 In 1951 former Navy officers in Chile had recreated the "Brothers of the Coast", following the example of the wild, but brotherly buccaneers on the small island "La Tortue", off the coast of Haiti. This revived version of sailing "brothers" spread fast all over Latin- and North-America and soon reached "Blue-water-sailors" in Europa, too.

I joined the first "table" of the Brotherhood in Germany in 1977.

It was no coincidence (?!) that one of the Montessori preschools for needy children, initiated by the Peter-Hesse-Foundation in Haiti was created on top of the mountain of "La Tortue". This sparked an additional small project to help the poor local fishermen on "La Tortue". With the initial help of my German sailing brothers we created a somewhat unusual "Table of the Brothers de la Tortue" - a solidarity action which survived for many years. - Please see an extract on this story from my book "VISION WORKS" here.